Juvenile Myoclonic Epilepsy Rhodesian Ridgeback Type (JME) is an inherited disorder characterized by myoclonic jerks and photosensitivity. JME in Rhodesian Ridgeback dogs is a canine equivalent to the human form of JME, with which it shares the same symptoms and age of onset. These similarities made the canine equivalent of this disorder important study model and contributed to the identification of causative mutation.

Studied affected dogs displayed frequent myoclonic jerks or twitches, which start to occur around 6 months of age. Owners of the affected dogs described the myoclonic jerks as severe startling or even resembling an electric shock. The myoclonic seizures can be triggered by visual stimuli, such as light flashes, a sudden incidence of light or flashing light on the sea waves. Photosensitivity was recognized in 35% of dogs. The twiches mostly occur when the dog is in the relaxed state, drowsy or when falling asleep or napping. Twitches can occur also during sitting, standing or walking. There were no noticed changes in the behavior. The myoclonic jerks were mostly limited to the trunk, proximal limb musculature, cervical musculature producing nodding movements of the head, and the face. The intensity can vary between events and affected dogs. After the seizure, the dogs seem confused and scared. Due to the seizures, sleep among those dogs was impaired. The frequency of the twitches can go up to 150 twitches per day. Affected dogs are usually euthanized upon owner’s request.

Juvenile Myoclonic Epilepsy in Rhodesian Ridgeback Dogs (JME) is caused by a 4-bp deletion in the exon 2 of the DIRAS1 gene, causing a frameshift and a loss of the stop signal. Research among other breeds affected with epilepsy revealed that this mutation is specific only for Rhodesian Ridgeback breed. A carrier rate of 15% was determined.

The expression of the DIRAS1 is limited to the brain and heart and it is suggested that DIRAS1 protein is needed for acetylcholine transmission at neuromuscular junctions and neuronal development. Nicotinergic cholinergic activity influences brain excitability and cognition, regulates the excitatory/inhibitory switch during neuronal development, stimulates glutamate release from thalamocortical terminals, and maintains nonrapid eye movement sleep by low levels of acetylcholine. Abnormal DIRAS1 function could alter cholinergic neurotransmission or formation of neuronal circuits and network assembly in the developing brain resulting in myoclonic epilepsy and photosensitivity.

Juvenile Myoclonic Epilepsy Rhodesian Ridgeback Type (JME)is inherited in an autosomal recessive pattern. Healthy parents of affected puppy are obligate heterozygotes and therefore carry one mutant allele. Heterozygotes have no symptoms. Dogs homozygous for the mutation will display the symptoms of the JME. At conception, when mating two carrier dogs, each cub has a 25% chance of being affected, a 50% chance of being an asymptomatic carrier, and a 25% chance of being unaffected and not a carrier. 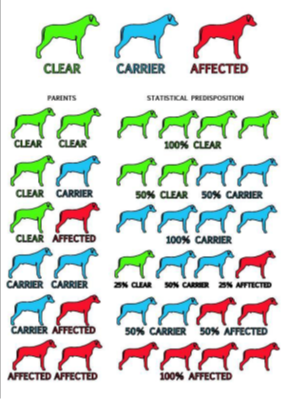