On the 8th of july 2001, my third litter was born, out of Kwetu’s Springtime in Holland (Kana, Imp.USA) and my own Holmland Owl’s Rafiki Cali.

Cali is from a DS-free litter, in Kana’s litter there was 1 DS. Kana herself has been on a high folate diet throughout her entire life.

At first, the litter looked very promising, 6 ridged pups and only 1 faulty ridge (single crown). Unfortunatly, after a couple of days we discovered that 4 pups had a Dermoid Sinus, all in the neck area.

I was faced with a very difficult choice, whether to cull the pups or have them operated on.

I found there was very little information on DS surgery available and the few articles on the Internet were all quite old and very negative about the surgery.

After speaking with several breeders and owners of dogs that had a DS removed and a long talk with a very experienced surgeon, I learned that the surgery wasn’t in fact that traumatic and in 90 % of the cases a total succes! So I decided to give my pups a fair chance.

Since I was fortunate enough to have a long waiting list with potential puppy-buyers, I had no trouble finding the puppies a good home. I also kept one puppy myself.

The new owners were of course well informed about the DS, the surgery and the consequences of this genetic defect. They knew in advance that their puppy was not show or breed material, and had to be spayed/ neutered. All the pups were placed in wonderful homes, at the age of 8 weeks.

At the age of 12 weeks (the surgeon doesn’t like to put younger pups under aneasthesia) we had all 4 pups operated, in two days time. I was present at all procedures and able to see for myself all the DS’s being removed. Two of the pups (including my own) had a quite thick, long DS, all the way to the vertebra.

Fortunatly, they did not go into the spine. The other two were more superficial and easy to remove. One pup had two smaller DS’s, both in her neck. They were both easily removed. The pups came home with us a couple of hours after the surgery. Their recovery was amazing, that same evening we already had trouble keeping them quiet! They were not in any pain and recovered quickly from the aneasthesia.

The pups had to wear a neck-bandage for two weeks, to prevent serum built-up and could not play with other dogs for that time. In stead we took them for trips into town and walks on leash, so they wouldn’t miss out on any socialisation. They were even able to go to puppy-class as usual.

My own puppy had some swelling under the wound, but after removing the fluid once, it didn’t come back. The other 3 puppies didn’t have any complications.

After a couple of weeks, it was all over and the scars weren’t even visible anymore. The pups are now 6 months and no one can tell the diffenence between the operated pups and their siblings. I am very glad with the results and have never regretted my decision to let these puppies live. Their owners are very responsible people, who will have the dogs spayed/ neutered when they are old enough (in Europe, we don’t do early spays). The 2 pups that are not afflicted will also be spayed, as is their mother. I feel very strongly that dogs that come from a high DS incidence litter should not be bred.

The cost of the surgery was about 1600 Euro, payed by me of course. But seeing those happy, healthy pups and their proud owners is worth every cent.

Kiku 7 weeks old. She had a large DS in the neck, which was not clearly visible at first sight. 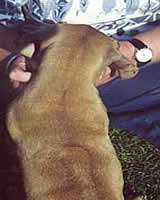 Kiku in a different light, from a different angle, we now see a “suspicious” spot, where the hairs seem te have a slightly different colour and structure. When you feel the spot, there seems te be a small “lump” under the skin. 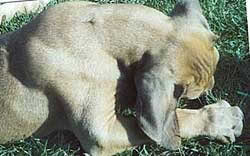 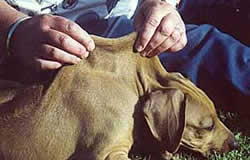 When the skin is lifted, the DS is clearly visible, as a “thread” which runs down from the skin to the spinal cord. Also note the “dip” in the skin. 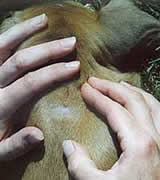 when the area is shaved, the exit of the DS is clearly visible. This particulair one has two exits! 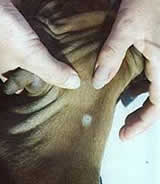 a different puppy, with a smaller DS. There was absolutely nothing to see from the outside. But when she was shaved there was no doubt, the exit is there. 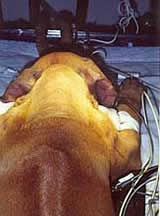 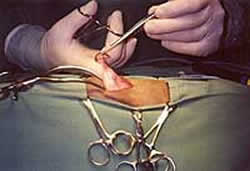 The DS is the white “thread” on top of the surgeons finger. 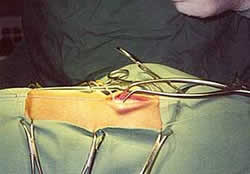 The DS has been separated from the surrounding tissues. 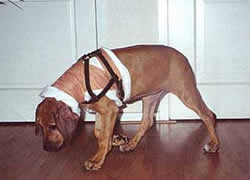 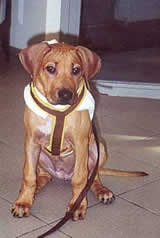 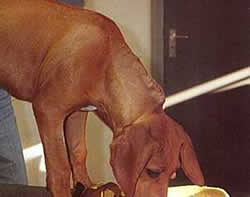 Some serum built up, despite the bandage. It had to be removed only once though. 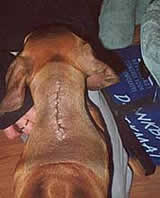 This is the puppy that had 2 DS’s. She healed without any complications.

Note, this article is in no way meant as an advertisement for DS surgery. The decision whether to cull or operate is up to each individual breeder. I do believe however, that the decision should be made based on facts and information and not on the slightly one-sided information that has been available up to now.

Also, I cannot stress enough that ALL pups should be placed with responsible owners, that do not breed dogs that have any kind of genetic problem.

PS – pictures and text can be copied freely and without permission from the author. 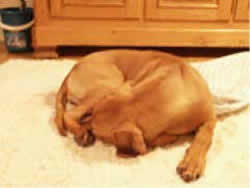 Kiku 6 months old. There isn’t even a scar anymore.